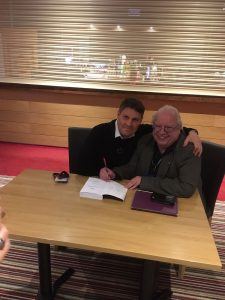 Are you ready for a cracking good read? Do you like science fiction, fantasy and other futuristic sci-fi titles? What about a friend or partner, do they like this genre? Released on March 1st 2017, Arcadia’s Children – fantasy fiction novel is the first offering from Andrew R Williams and what a first novel it is too.

UK based Andrew R Williams is already working on a sequel to Arcadia’s Children, underpinning his and the publisher’s belief that his first book will be a resounding success. The fantasy, fiction, sci-fi genre is an exciting place, full of aliens, robots, clones and futuristic worlds, often mixing with real-world, creating a means of escape and excitement for the reader.
“During this period she discovers that Zia Warmers (Hal Warmers’ partner) has special abilities. (She can metamorphose.) She then discovers that Detective Corporal Mick Tarmy has special mental abilities. Realising she could weld them into a team to fight The Great Ones, Samantha makes things happen.” – Arcadia’s Children by Andrew R Williams

Arcadia’s Children does not disappoint. A fast-paced action-fest that introduces us to death, attempted murder, revenge, special abilities, droids and ultimate battles. It has everything that the discerning fantasy/sci-fi enthusiast yearns for and will introduce Andrew R Williams as a new author to follow in the future.
“After losing her mercenary force in the Fyfield Valley, Samantha is looking for revenge. She wants to make The Great Ones pay for their impudence. Although murderous thoughts aren’t normal in droids, let alone an advanced humanoid like an Ingermann-Verex R9054, Samantha has them.” – Arcadia’s Children by Andrew R Williams

Order your book now and immerse yourself in the mind of the author, where fiction and fantasy blend together and will whisk you away to worlds different than ours.  Download the book to your devices and allow yourself to be transported into a futuristic want-to-be Utopian world, struggling to live up to the expectations.

Arcadia’s Children is available for download directly from Amazon at the following Links: