Klaien Mygael glanced at the SSIAT building and then took a deep breath. As she’d lived a sheltered middle class life up until that point, being asked to break the law didn’t come easy.
After psyching herself up, she slipped on the distortion collar that Alton had given her and then began walking towards the tall building.
As she was crossing a pedestrianised area, she glanced at reflection of herself in a nearby window and was pleased to note the collar had totally altered her appearance; it had also made her look twenty years younger.
After reaching the main entrance of the SSIAT building, she noted that one of the outer shutters was still retracted and a lift door visible. Activating her percom, she locked onto the building’s external comms port and then waited. A few seconds later a power bubble formed and the image of a droid appeared, an Alpha 300. Without prompting the machine said, “It’s after hours – The facility is closed.”
As Klaien hadn’t been anticipating a robotic response, a mild wave of panic ran through her system; something had gone wrong. She was seriously considering abandoning her mission when the bubble content suddenly changed and Unnan Vardis’s image appeared, “Sorry about that – The automated system cut in.”
He then said, “Have you got the money?
Klaien held up a large brightly coloured paper bag she was holding, “It’s in here.”
While she was still holding the bag aloft, the contents moved slightly. Although she realised that Rover was getting restless from being cooped up inside, she hoped Vardis hadn’t noticed and just said,“ Are you going to let me in?”
“Okay,” Vardis replied. “Come up.”
A moment later there was a slight whirring noise and an outer lift door opened. Once in the lift, she was whisked up to one of the upper floors. When the doors opened, she found herself in a lobby and a woman was waiting there, “Come this way – Unnan’s through here.”
As she pushed her way through a set of fire doors, the woman glanced back and added, “I’m Marci by the way – I’m Unnan’s partner.”
The comment surprised Klaien because during previous conversations, Vardis had implied he lived alone. After walking another five metres, Marci walked through an open door and then led the way into a spacious living area. As one of the doors to an adjacent room was slightly ajar, Klaien caught a glimpse of a charging unit and immediately worked out the truth. Although Marci looked human, simple logic implied she was a humanoid.
Noting the expression on Klaien’s face, Marci glanced towards the open door and then said, “Ha! I see my little secret is out – I hope you’re not offended.”
“Why should I be?”
A male voice then said, “Some people are.”
Glancing around, Klaien saw Vardis standing there and she said, “Well I’m not – I was just surprised because you said you were single.”
“In the eyes of the law I am,” Vardis replied. “Marci and I are partners but it’s not recognised.”
He then said, “So let’s see the money.”
Klaien nodded and pulled out two large denomination money cards but kept a firm hold onto the bag. Vardis gave her a sharp look, “That’s only half of what we agreed.”
“You’ll get the other half once the jobs complete,” she assured him and then passed over a sheet of paper. “Those are the teleport co-ordinates.”
She then glanced at her watch, “As agreed, in a few hours from now two separate groups of people will come here. The first group want to teleport to Salus Transporter Nine and the second group wants to go to Awis Oasis.”
“I want the rest of the money first,” Vardis growled.
“Very well,” she agreed. “It’s in the bag.
Vardis was about to reach in but the bag rustled and a small rugby ball shaped droid emerged.
“What’s this?”
“My insurance policy,” Klaien replied. “This is Rover – He has the other cards in his internal safe and has orders to pay you the balance once we’re all safety teleported.”
Vardis gave her a hostile look. “Don’t you trust me?”
“I once heard of a teleport operator who cheated a group of people,” Klaien replied. “He promised to teleport them if they gave him a large sum of many. He took their money but instead of teleporting them, he put them into stasis. He then called the police – He denied receiving any payments.”
Vardis clicked his fingers and then gestured towards Marci, “And she’s my insurance policy.”
Glancing round, Klaien noted that Marci was holding a stun gun and it was levelled at her. Vardis said, “Now get your droid to hand over the other money cards.”
When Klaien gave a Vardis a sharp look, he smirked and said,“You were right – I have no intention of getting your people out of here did you? Illegal teleporting is a criminal offense.” 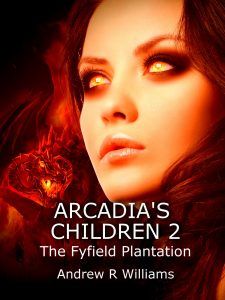