At this time of year Japanese Knotweed is dormant during the winter but it won’t be long before the 2016 growing season starts in March/April.

In Spring: Young red/purple asparagus like shoots appear which turn green as they age. Some plants leaf initially but can grow 50cm as straight rod.
In Summer: These shoots turn into bamboo like hollow stems, with regular swollen often red, joints & nodes. Stems can grow up to 3m in height. Leaves are lush green and can be described as heart shaped.
In Autum: Flowers bloom 80mm-120mm in long clusters of small green/white flowers. In late autumn flowers start to fall. (See photograph)
In Winter: Stems turn brittle and brown, leaves turn brown/yellow and eventually fall off this usually starts to occur during first frost.
Japanese knotweed is commonly known is a highly invasive, non-native plant found in the U.K. It has the potential to damage buildings, structures and over-power native species, eventually eradicating them from their own environment.
Japanese Knotweed is proscribed under the Wildlife and Countryside Act 1981, making it an offence to allow the plant to spread. All parts of the plant, and any soil contaminated with the rhizome, are classified as “controlled waste” requiring all the “duty of care” requirements under the Environmental Protection Act 1990 to be met.
The Japanese knotweed plant can regenerate from rhizome fragments as small as 0.7gram and can remain dormant in the soil for over four years making a professional and scientific approach to its eradication vital if 100% success is to be guaranteed. 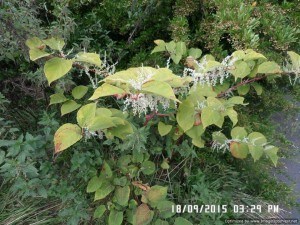