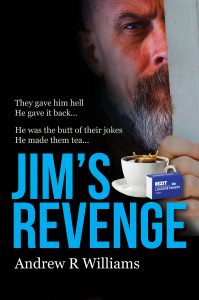 By day mild mannered Andrew R. Williams is a chartered surveyor…. but after twilight falls, he snatches up his pen and the writing takes control. Jim’s Revenge has now been published.The Arcadia’s Children series will very shortly have a third installment. When he isn’t writing, or surveying , Andrew spends time with his wife Geraldine, staring up at the stars, and plotting eventual world domination. Don’t let that calm demeanour and easy smile fool you, oh no.

Jim Godwin was a man who tried hard to and honourable life. All he wanted was a part-time job to put a bit of money on the table. But instead, Jim happened to be at the wrong place at the wrong time. He was dragged into the underbelly of a world that he di

This is a mystery thriller that made me wonder and think quite a bit not only about what was going to happen next but also about what would happen to some of the characters. It is an unforgettable story that lingers with you for a while even after you have read the story. It is a story that has breath and depth.

Jim Godwin was a man who tried hard to live a honourable life.  All he wanted was a part-time job to put a bit of money on the table. But instead, he just happened to be at the wrong place at the wrong time. He was dragged into the underbelly of a world that he didn’t expect.

This world was anything but calm and peaceful. His job was anything but straightforward. He was bullied and manipulated. He kept putting up with all the turmoil and destructive things that they said and did to him until he snapped and decided to stop being the pushover and be the bully himself.

This is a story that a lot of people will be able to relate to in today’s day and age. There are so many people who seem to be psychologically and sometimes even physically hurt and abused by manipulative and destructive people. And it is all too human to feel like getting back at these people and giving them a bit of their own toxic fumes and abuse.

This story is well-paced, and it has some comic elements. The plot is intriguing, and it leaves one wondering what will happen next. The scenes are poignant and well-illustrated. I read this story quickly the first time. But then I reread it in order to pick up some of the subtleties and nuances.  I can’t wait to read Williams’ next book.

5.0 out of 5 stars A perfect build-up to a hilarious ending

Jim’s Revenge is completely different from Andrew William’s other novels so I must admit, I read it wondering whether he could deliver the same quality. The answer is definitely. The characters are well drawn and the plot is as intense as always – leading to a ending that is hilarious as well as action packed. How Williams manages to pull all the threads of his plot together is beyond me, but yet again he has triumphed. A definite must read.

5.0 out of 5 stars A first-class comedy mystery thriller with perfect pacing.

I enjoyed the story, character development, and dialogue. There were plenty of plot twists that I didn’t see coming and that added to the book’s mystique. When I stopped reading to work, I found myself wondering what happened in the book, and replaying parts of the novel in my head to see if I could figure more out. It has been a while since I enjoyed a book this much. It’s a first-class comedy mystery thriller with perfect pacing. Not much is as it appears here, which is just the way fans of mystery, thriller and suspense will want it.

Jim’s Revenge had every element a good story should have. An intriguing plot, attention to detail, but best of all fleshed out, well-written and well-rounded character development. There’s an abundance of well-illustrated scenes that make you feel like you are right there in the story, and that’s something I really look for in a good book. It’s one of those stories that come along once in a while that makes you want to read it non-stop until you get to the end. I’m giving nothing further away here. And this, I hope, will only add to the mystery and enjoyment for the reader!

I’ll be looking forward to reading more from Andrew R. Williams in the future. I would definitely recommend this book. Although, for those who are linguistically sensitive, profanity is used and there are some scenes of a sexual nature.

A well-deserved five stars from me.