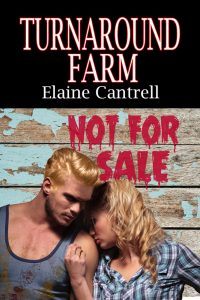 Turnaround Farm – Dedicated career girl Holly Grant has no time for romance. She doesn’t need a man to complete her thank you very much. Building Grant Realty takes all of her time and attention. If she can close a deal for Turnaround Farm her business will take off like a rocket. Her first problem is that Jeb Wakefield doesn’t want to sell his farm, and her second problem is Jeb’s grandson Dan, the finest looking man Holly’s ever seen.

Turnaround Farm is not the sort of book I normally read. This is probably because I possess a Y chromosome.

But I read the teaser at the beginning of the book and couldn’t stop reading.

Talk about hot and steamy.

I had to take a cold shower!

I also loved the rest of it. The book is 349 pages in length and I’ve read every one of them. I didn’t skim though it like some books I’ve read. More importantly, I couldn’t stop reading. That’s when you know you’ve found a good book.
The main characters are Holly Grant and Dan Wakefield. Both have issues which influence their lives.

Holly’s mother moves from man to man, choosing one bad partner after another. Fearing she will end with her mother’s syndrome, Holly has vowed to remain single.

Dan Wakefield’s father had a bad reputation in the area and this hangs over his son like a storm cloud.

Turnaround Farm appears to be part of Fairfield; small town America where everyone makes a point of knowing everyone’s business.

Holly is an estate agent who wants to acquire Turnaround Farm for a developer. Dan doesn’t want the farm to be sold because although it is in a rundown condition, he has worked hard all his life to keep the family business going and to atone for his father’s misdeeds. (Drug mule)
The two main characters meet when Holly and her assistant have to abandon their car in bad weather and are forced to stay at Turnaround Farm.

As Turnaround Farm lacks the benefit a modern electrical system, following a call of nature Holly ends up in Dan’s bedroom and slides into bed with him by mistake. When he makes a grab for her, Holly realises she’s in the wrong room and manages to extricate herself before Dan can have his wicked way with her.

The embarrassing incident creates bad feeling between them and initially poisons Holly’s mind against Dan despite his shoulders being so wide he has to turn sideways to walk through doorways.
But then Holly and Dan’s extended family conspire to get them together. All should have run smoothly but the local sheriff and FBI began looking for a local drug ring. Would Dan get sucked in? There is also a Hollywood superstar and a bungling FBI agent thrown in. Nice twists.